The story hasn’t changed, but the digits have gotten bigger. The number of virus cases and the percentage of stock market losses both spiked dramatically early Monday, with futures pointing to a 2.5% drop as the disease spread in South Korea and Italy over the weekend.

People need to strap in today, as news of museums and libraries closing in Italy are among the reports that have many investors feeling spooked. Governments are doing their best to contain the illness, but at the end of the day, people have to travel, and that’s spreading it.

Investors have the defensive unit on the field early on, with bonds, gold, and volatility all flashing warning signals. The Cboe Volatility Index (VIX) zoomed up to nearly 23 from a low of around 14 last week. Gold is making new seven-year highs, and bond yields are near historic lows. Crude is getting smacked.

The drop in yields over the last few days is what’s really incredible. As for stocks, we’ve said before that there might be a 5% sell-off at some point in Q1, and here we are. The virus is a huge unknown, so people are buying more protective-type assets.

The International Monetary Fund (IMF) said on Saturday that the virus will likely cut off 0.1% from global growth, and drag down growth for China’s economy to 5.6%, which is 0.4% lower than its January outlook.

Tech, Travel And Leisure Among The Early Casualties

Monday’s early struggles—which are pounding tech and travel stocks—followed a tough week when coronavirus dominated the news and the market stepped back from record highs posted earlier this month. Selling pressure showed up across the board Friday, with only the so-called “defensive” sectors like Utilities and Staples staying in the green. Monday is likely to be a very volatile day with big volumes.

It’s a headline-driven market, with the coronavirus front and center the way the trade war was last year. At this point, it looks like positive or negative news about the virus could continue to determine which way things go. Like the trade war, no one knows when this might end. However, the virus actually presents far more uncertainty than the trade war did, because with trade, people knew China and the U.S. could sign a piece of paper, as one analyst pointed out.

You can’t sign an agreement with a virus. You can only hope the medical community finds an effective way to shut it down, not just for the market, but to limit the tragic human toll. In the meantime, it might make sense to hunker down, not make any huge trades one way or the other, be sure your portfolio still matches your long-term goals, and watch and wait. Overconfidence is the thing to be careful about. You always have to be respectful and fear these markets. The minute you think you have it figured out, this market might punish you.

For example, think about what we’re seeing this morning. It might have seemed like Friday’s finish offered some hope. Stocks ended well off their lows, and it looked as if the market was keeping its head above water. Then new cases surfaced over the weekend and the sell-off resumed.

Shares of Information Technology stocks like Nvidia Corporation (NASDAQ: NVDA), Apple Inc (NASDAQ: AAPL), and Advanced Micro Devices, Inc. (NASDAQ: AMD) got hit hard Friday and again Monday morning after leading the rally over the last few weeks. The tech sector definitely suffered most as the week ended. Airline and resort shares were among others getting slammed in pre-market trading Monday.

Low bond yields don’t necessarily just reflect concerns about the economy. They’re also a possible sign of people flocking into something they see as a port in the storm. While no investment is truly safe, the U.S. government’s credit is one place people might feel more comfortable if the virus really becomes a bigger issue for China-dependent supply chains or if it starts to spread in the U.S.

Also, you could argue that lower bond yields are historically sometimes a signal that stocks might have some traction, with borrowing costs down for companies. That doesn’t mean anyone should jump right in, but could suggest a “buy the dip” scenario might still be out there at some point. At the same time, odds of a rate cut by mid-year, which had been 50-50 early last week, rose to nearly 75% in the futures market early Monday. Odds of a cut in March, which had dropped to 10% last week, stand near 20% this morning.

Though bonds might hint at economic issues ramping up, the latest Atlanta Fed’s GDP Now reading forecasts 2.6% gross domestic product growth (GDP) this quarter. As a Trump administration official pointed out on CNBC Friday, that might have been even higher without issues like the Boeing Co (NYSE: BA) 737 MAX production stop and possibly the virus. On the other hand, the Atlanta Fed’s estimate continues to run hotter than some analysts expect, which is around 1.5%. We’ll get an Atlanta Fed update this Thursday.

GDP Ahead, Along With Home Depot And Macy’s Earnings

Since we’re talking GDP, remember that the government is scheduled to issue its second projection on Q4 GDP growth on Thursday morning. Last time out it was 2.1%, a little better than analysts had expected.

If you’re keeping score at home, other data to monitor include consumer confidence tomorrow, new home sales on Wednesday, durable orders on Thursday, and personal consumption expenditure (PCE) prices and University of Michigan sentiment on Friday. By the end of the week, we’ll have a better sense of how consumers feel and whether inflation is starting to pick up after a higher-than-expected producer price index (PPI) reading earlier this month.

The earnings show slows down a bit this week with the season pretty much over. Retailers are the main ones to keep an eye on with Home Depot Inc (NYSE: HD), Lowe’s Companies Inc. (NYSE: LOW), and Macy’s Inc. (NYSE: M) among the highlights.

Earnings are up more than analysts expected in Q4, but price-to-earnings for the SPX on a forward basis are above 19 and, according to some calculations, hit multi-year highs last week. This could potentially blunt some of the buying interest. 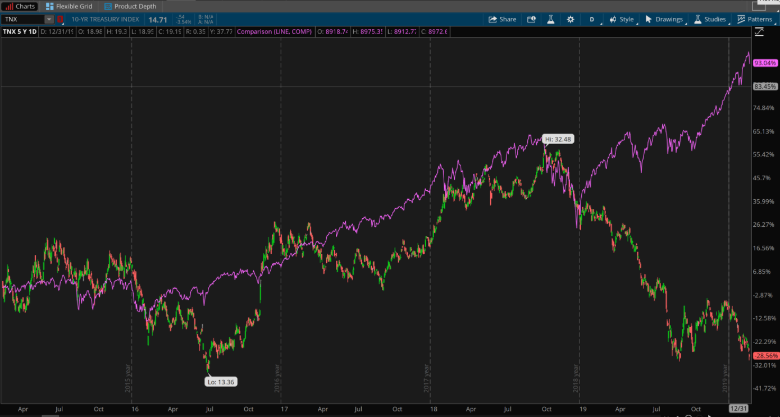 CHART OF THE DAY:  DOES SOMETHING NEED TO GIVE? This five-year chart comparing the 10-year Treasury yield (TNX—candlestick) to the Nasdaq (COMP—purple line) shows the COMP coming a long way since the 10-year yield bottomed in June 2016, but the 10-year yield back almost to those historic four-year lows. Some analysts wonder if this strange alliance of historically high stocks and bonds can continue. Data Sources: Cboe Global Markets, S&P Dow Jones Indices.Chart source: The thinkorswim® platform from TD Ameritrade. For illustrative purposes only. Past performance does not guarantee future results.

Staying Positive: February’s rapidly winding down, and there’s still a chance it could be a positive month for U.S. stocks despite a lot of headwinds. January saw the SPX fall slightly as coronavirus worries dominated, and those of course haven’t gone away. Still, as long as the SPX stays above the Jan. 31 close of 3225 this week, it will guarantee a nearly two-year streak where the index hasn’t fallen in consecutive months.

The last time the SPX fell two months in a row was February and March 2018, back when rising interest rates and the swelling trade war with China helped whipsaw the market. You may remember the nearly 20% SPX decline from highs later that year, but it didn’t feature consecutive lower months (October 2018 and December 2018 were rough but November saw a slight gain). The last time the SPX fell three months in a row was in late 2015/early 2016, a time marked by worries over China’s economy. Maybe that’s something to keep in mind going into March. When China softens, the U.S. tends to feel ramifications.

3-2-1-Liftoff! Two of the biggest gainers over the last few months, even including the recent rough trading, were companies that seem particularly popular with younger investors: Tesla Inc (NASDAQ: TSLA) and Virgin Galactic Holdings (NYSE: SPCE). While everyone’s been giving TSLA attention, SPCE shares had a rocket launch of their own as they sped upward from around $10 last fall to highs above $37 this month. A lot of millennials over the past six months were buyers of TSLA, according to TD Ameritrade data. Younger people often buy products they’re  familiar with, or more importantly, think are going to be viable products down the road.

It does make sense to say that some of these, maybe Virgin Galactic, may be a product that makes sense in 10 years. If your time horizon is longer, that can affect your thinking as you invest, but it’s also important to be patient. These stocks are likely to have their downs as well as their ups in coming years, and like all companies, could see their products continue to grow in popularity or flop. If you go in for the long-term, do it with open eyes.

The Politics of Crude: It’s easy to blame crude’s weakness on coronavirus, but that’s not the only issue out there. Some oil analysts think there’s a little election-related concern keeping prices down, too. In a Washington Post candidate survey on climate change, two of the leading Democratic challengers for the presidential nomination said they’d support banning U.S. fossil fuel exports. That wouldn’t have been much of an issue, say, 10 years ago, when U.S. crude exports averaged less than 60,000 barrels a day, according to the Energy Information Administration (EIA).

Whatever one thinks of the idea’s merits or lack of them, it’s hard to imagine any president being able to put such a ban into place considering the political challenges involved. It’s also hard to imagine the weight on crude prices if those three million daily barrels were left sloshing around here in the U.S. instead of going somewhere else. Not likely to happen, but then, the crude market often trades on psychology.

Information from TDA is not intended to be investment advice or construed as a recommendation or endorsement of any particular investment or investment strategy, and is for illustrative purposes only. Be sure to understand all risks involved with each strategy.

Image by Foundry Co from Pixabay