Anyone hoping for a quick comeback from the worst session in two years could be in for disappointment. Things seem to be on more solid footing to start Tuesday amid a host of decent earnings news, but several stocks got downgraded and the virus showed no signs of slowing down.

Some of the downgrades include Tesla Inc (NASDAQ: TSLA), Nvidia Corporation (NASDAQ: NVDA), and Micron Technology, Inc. (NASDAQ: MU). Not all of these were specifically virus-related, though the analyst downgrading NVDA did mention potential virus impact. Chipmakers like NVDA were some of the hardest hit yesterday, along with airlines, casino operators, and resorts. None of the issues that helped put these shares on the run yesterday have disappeared, as these companies are highly-leveraged to the global economy and the impact of coronavirus.

In another virus-related hit, United Airlines (NASDAQ: UAL) suspended its 2020 guidance, citing the impact of the coronavirus on travel, media outlets reported. The airline also said that near-term demand for travel to China has pretty much disappeared. When you consider the importance of China as a business destination, this is pretty concerning news. Many U.S. executives have traveled there dozens of times.

This isn’t necessarily a market where you can draw a line in the sand. It’s likely we’ll see the drama play out over a few sessions, with the assumption being that earnings could be affected this quarter and maybe in the future. Earnings drive stocks, and now there might be a need to align stocks with these new earnings expectations. So it could be interesting to watch for any adjustments in Q1 earnings projections from analysts in the coming days.

Yesterday’s pressure on some of the “darlings” of Wall Street like Microsoft Corporation (NASDAQ: MSFT), Facebook Inc (NASDAQ: FB), and Apple Inc (NASDAQ: AAPL) also could help make today a bit of a wild card. These are very popular stocks taking a big hit, so it’s likely that almost every investor out there felt the pain.

Even if you don’t own these directly, they tend to take up a large amount of space in most large-cap mutual funds, as fund managers have been under pressure to add them as their shares kept ringing up big gains over the last year. Now, the major indices have given up their 2020 gains after being driven higher by these stocks and some other big names.

In the hunt for something positive, there’s a bunch of solid earnings to consider, including HP Inc (NYSE: HPQ). The company’s results yesterday beat top-and-bottom-line Street expectation and shares surged more than 4% in pre-market trading. A new share buyback plan apparently contributed to investor excitement.

Things also looked solid at Home Depot (HD), a company that often gets seen as a barometer for the housing industry. HD beat analysts’ estimates on earnings and revenue, and saw same-store sales climb 5.2% in its fiscal Q4. Shares rose more than 2% in pre-market trading.

Macy’s Inc (NYSE: M) initially enjoyed a share gain after reporting results early Tuesday, but the gains have turned into slight losses in the pre-market hours. M beat analysts’ estimates on revenue and earnings, but same-store sales fell 0.5%. One good thing was hearing the company talk about a “significant trend improvement” in Q4 that helped holiday sales. Some other big retailers struggled during the holiday season.

Technically, the market looks a little shaky after yesterday’s losses took out so many support points and probably set off some automatic selling as the market tore through stop orders and many investors found themselves forced to sell. From a fundamental standpoint, last week’s disappointing services data remains in the background as people worry about a possible slowing economy. Volatility remains elevated with the Cboe Volatility Index (INDEXCBOE: VXS) above 23 this morning but down from yesterday’s peaks above 25.

The earnings news looks pretty good this morning, but profit-taking might not be over. There seemed to be a lot of that going around last week, and Monday probably featured some, too. Until recent days, we’ve had an absolutely crazy start to the year, with record highs set again and again. Though there’s nothing that says the market can’t recover and possibly roll up more gains, it’s also possible that some people want to take profits while they still have some.

Fed Under Scrutiny As Speeches Loom

While we all watched the stock market get pounded and bonds scurry to record- or near-record highs yesterday, something kind of remarkable happened in Fed funds futures. Odds of a rate cut next month jumped to around 20% from 10% a week ago. Odds of at least one 25-basis point rate cut by mid-year, which had been 50-50 a week ago, are now more like 75-25.

It looks like people are factoring in a Fed response to the virus, though Cleveland Federal Reserve President Loretta Mester said Monday she doesn’t favor any further cuts despite seeing possible downside risk to the economy from the situation.

Mester represents just one opinion among many at the Fed, however, and that opinion tends to often come down on the hawkish side. It might be useful to listen to some of the more “dovish” Fed officials in the coming days to see where they might land. For instance, St. Louis Fed President James Bullard has a dovish reputation on Wall Street, so the next time he talks it could be interesting to hear if he pushes for more cuts.

Later today, at 3 p.m. ET, Fed Vice Chair Richard Clarida is scheduled to deliver a speech called, “U.S. Economic Outlook and Monetary Policy.” If you normally follow the Fed (or even if you don’t), it might be wise to check what Clarida has to say in regards to how the virus might impact the economy. His speech will probably get more attention than usual considering the timing, and sometimes Fed remarks get published ahead of the speech, so be on the lookout.

Before Clarida talks, Dallas Fed Bank President Robert Kaplan will deliver remarks this morning, so that’s another thing to watch. Consider keeping an eye on the bond market, too. Things don’t look much better over there, with the 10-year yield at 1.37% early on. The all-time low is 1.34%. 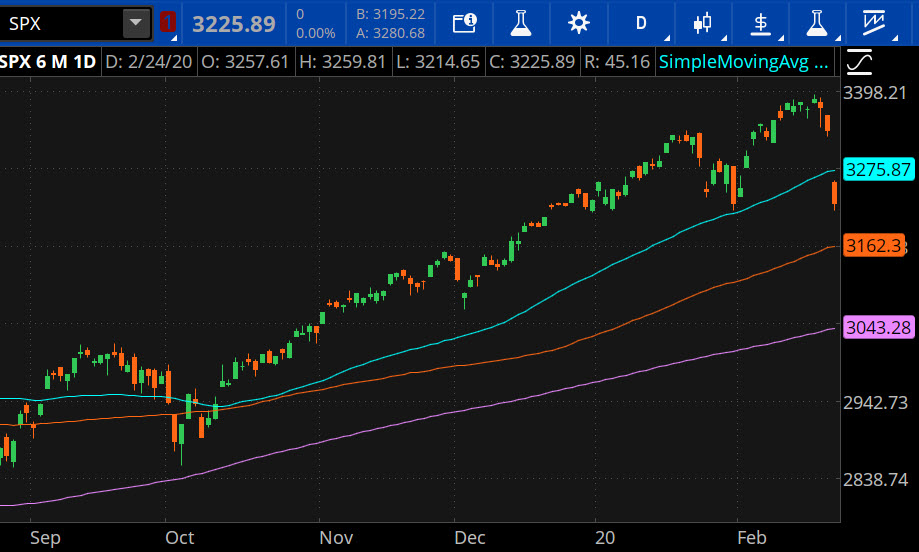 CHART OF THE DAY: ABOVE AVERAGE, BELOW AVERAGE. The benchmark S&P 500 Index (SPX—candlestick) blew through its 50-day moving average of 3275 (blue line) yesterday—recall that the SPX bounced off the 50-day on Jan. 31, but this time it offered no support. The next spot to look for is the 100-day at 3162 (orange line), but you’d have to go all the way down to 3043 to test the 200-day (purple line). Though Monday’s meltdown was painful by pretty much any metric, the moving averages should serve as a reminder as to how far the market had advanced over the last 6 months. Data source: S&P Dow Jones Indices. Chart source: The thinkorswim® platform from TD Ameritrade. For illustrative purposes only. Past performance does not guarantee future results.

Law of Large Numbers: A 1,000-point daily drop in the Dow Jones Industrial Average (INDEXDJX: .DJI) isn’t something to take lightly, but it does deserve a bit of perspective. At some point, the law of large numbers comes into play. In other words, yesterday’s 1,000-point drop doesn’t necessarily have the same meaning as it would have five or 10 years ago. For instance, five years ago, the $DJI was at around 18,000, so a 1,000-point drop would have represented 5.5% of the index value. Ten years ago,  1,000 points would have been nearly a 10% chunk of the $DJI. Now it’s less than 4%.

That doesn’t mean we can dismiss what’s happening—a 4-digit move in $DJI is still going to leave a mark—but it does help to remember that as investors, we all carry numbers around in our heads that sometimes don’t keep up with the times. Back in 1987, when the $DJI plunged more than 500 points in a day, that was almost a quarter of the market’s value. At this point, a 500-point drop sometimes gets overcome pretty quickly, though there aren’t any guarantees. This kind of perspective can be helpful if you’re trying not to panic.

Running Out of Space? We’re in the middle of the monthly flow of housing data, so maybe it’s logical that a company which is sometimes seen as a real estate barometer reports this week. Public Storage (NYSE: PSA), which is scheduled to report after the close today, is one of the worst performers in the S&P 500 lately after enjoying a monster run early last year. This might seem kind of odd when you consider all the scaffolds and construction sites across the country—which possibly point to demand for rental housing and people needing space to store things when they move or downsize. However, if storage facilities are seeing less demand for too many facilities (and a Canadian storage company said basically that recently), it could mean maybe there’s some over-building going on in real estate, too. It might be interesting to hear what PSA’s executives have to say on their earnings call tomorrow morning about that, if anything.

The Odd Couple: Gold and Oil. Gold and oil are dollar-denominated assets and both are generally correlated—they tend to move together in the same direction. Usually when oil prices are high, it could be an indication of high inflation. And investors tend to hold gold as a hedge against inflation and a store of value when things are uncertain. So, from that standpoint, it makes sense for the two to move together. But that isn’t the case right now. The price of gold is rallying higher even though inflation isn’t a concern and  crude’s moving in the opposite direction. This decoupling between the two has happened before, but this time it may be different.

Could there be a shift in market dynamics? Markets evolve and if you look at the fundamentals of crude, there appears to be some major changes taking place especially in its supply and demand. Overall, demand for oil seems to have declined and domestic supply in the U.S. has increased due to more domestic production. Because of this, tensions in the Middle East may have as much of an impact on crude’s price as in the past. Does this mean gold and oil may no longer move together again? It may be too early to tell but the possibility can’t be ruled out.

Information from TDA is not intended to be investment advice or construed as a recommendation or endorsement of any particular investment or investment strategy, and is for illustrative purposes only. Be sure to understand all risks involved with each strategy.

Image by Pexels from Pixabay