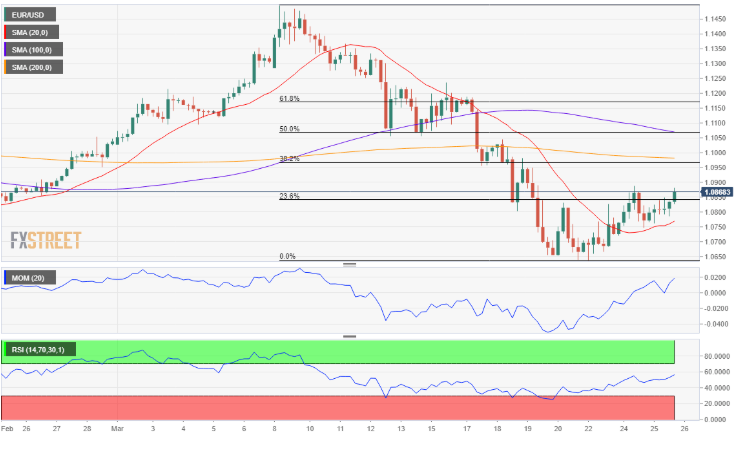 Things were quieter around the FX board this Wednesday, as market players continue to digest the latest announcement to counter the economic effects of the current global health crisis. The announcements, however, are being taken with a pinch of salt, as the coronavirus keeps spreading exponentially, mainly in Europe and the US. A peak, even in Italy, is not yet a sight. Among the latest measures, Germany lawmakers have agreed to suspend limits to the deficit spending, while US lawmakers agreed on a $2T  stimulus package that will likely be approved by Congress later this week.

The EUR/USD pair peaked at 1.0881, holding on to modest gains ahead of the Asian opening, as equities posted substantial gains for a second consecutive day. US Treasury yields also advanced a little, but as said, investors remain cautious amid the uncertain future of the world’s economies.

Germany released the March IFO Survey, which was worse than expected. The Business Climate was confirmed at 86.1, following a preliminary estimate of 87.7. The US released February Durable Goods Orders, which were up by 1.2% in the month, much better than anticipated, although Non-defense  Capital Goods Orders ex Aircraft fell by 0.8%. This Thursday, Germany will release the April GFK Consumer Confidence Survey, seen at 7.1 vs 9.8 previously. The US will publish the final version of Q4 GDP, seen unchanged at 2.1%, but also weekly unemployment claims for the week ended March 20, seen soaring to 1,000K amid the ongoing crisis.

The EUR/USD pair is gaining bullish strength, currently surpassing the 23.6% retracement of its latest daily slump at 1.0840. In the 4-hour chart, the 20 SMA is slowly grinding higher below the current level, although the price remains well below the larger ones. Technical indicators hold above their midlines, the Momentum easing and the RSI flat slowly advancing at around 56. Beyond the weekly high, the pair has room to extend its gains towards the 1.0960 price zone, where it has the 38.2% retracement of the mentioned daily slump.

Calvin Klein-parent PVH CEO on Macy's woes: 'We have a great deal of confidence'...