If you thought last week’s Tech selling was just the market flinching ahead of the holiday, Tuesday morning feels like an ugly wake-up call.

The dip-buying mentality from Friday didn’t spill over as Nasdaq 100 (NDX) futures fell about 3% in pre-market trading. Tesla Inc (NASDAQ: TSLA) is down double-digits ahead of the bell amid disappointment over it not getting included in the S&P 500.

TSLA not getting added to the S&P 500 might have been the big event setting off a lot more of the selling. A lot of people had expected it would be put there, which would possibly have supported it as many S&P 500 Index (SPX)-tracking funds would have had to add TSLA to their collections. TSLA helped lead everyone up, and now maybe it’s taking the lead in the other direction.

One thing investors shouldn’t do is panic. We were up so many days in a row and now we’re not. If you look at where we are right now and want some perspective, the market is back at the levels it was at on Aug. 20.

Let’s drill down to see why this selling might be happening and what it means as fall unofficially begins.

The market plunged Thursday and then again early Friday before clawing back from its worst levels by the closing bell. That was in low-volume trading ahead of the long weekend and appeared to reflect a little “buy the dip” mentality. It’s also typical to see a slow grind higher the afternoon before a three-day holiday.

Volume was light on the way up Friday, which is why you can’t always trust a last-minute move ahead of a long weekend. A lot of people still question valuations, especially in the Tech space. Those questions don’t go away just because of Friday’s late recovery, and a big shift in momentum like we just had can take a few days to reverse.

With all that in mind, you could make the argument that the lows might have to be tested again sometime in the next week to week-and-a-half. The question is how long it might take. Today’s early action suggests it might be sooner rather than later.

That said, the market has come back quickly from previous stumbles lately, in part because many people tend to see drops as a buying opportunity, particularly for mega-cap tech shares. That may eventually be the case, but it’s not happening in the early going.

Where could some support come in? Last week’s lows are one possibility.

The COMP’s low late last week was 10,875, down about 10% from Wednesday’s close and 5% below Thursday’s close. Then it rallied back to being down less than 1% at one point late Friday before closing off about 1.3%.

That means 10,875 could be the level to watch for possible support on any pullback here, and also represents about the level of a formal “correction,” which many analysts see as 10% from highs.

In the SPX, the Friday low of 3350 might be interesting to keep an eye on. The SPX tumbled below two key support levels earlier Friday at 3426 and 3393 pretty quickly and then managed to plow back and close right at 3426, the low posted overnight between Thursday and Friday. Holding this level could be key to seeing more buying interest come in.

The SPX only was down a little over 6% from all-time highs when it reached its low mark last week, so it remains well off correction levels. A correction would bring it all the way down to 3222, a level it last was near in late July.

Analysts warn that liquidity has been light lately in general, even before the big sell-off Thursday. This might make the market more prone to big gains and losses like we’ve been seeing. It’s also possible that action in the fixed income market this week could help determine some of the direction. Volatility jumped 15% this morning before the bell.

There’s also a lot of news about how one Japanese conglomerate had been making big bets on Tech in the options market. The idea that one major player might have been behind a lot of the run-up could be making people nervous, especially if that player shows hints that it might be ready to pick up some of its marbles and go home.

A couple other fundamental factors could be pressuring stocks early on, including a 6% slide in crude prices as summer driving season ends and fears of more virus cases as autumn continues. There were headlines over the weekend with experts predicting an uptick. On the potentially positive side, there’s a little merger and acquisition (M&A) news this morning as General Motors Company (NYSE: GM) entered a partnership with Nikola Corporation (NASDAQ: NKLA), a company with electric and hydrogen car technology.

The Demand Side Of The Equation

If investors want to bid on “reopening stocks,” they’re probably going to be focused on any signals of economic momentum. One of these is how weekend travel demand went.

Last Thursday, the Transportation Security Administration (TSA) said 877,000 passengers went through travel checkpoints, compared with 2.1 million on the same weekday a year earlier. That’s a 58% drop, which isn’t good, but it’s way better than the 88% drop seen on the Thursday before Memorial Day. This continues to be a key metric to watch for anyone checking signs of economic recovery.

Though travel looks better than it did a few months ago, you can’t necessarily ignore weakness in crude. The front-month U.S. crude futures contract had been holding $40 a barrel since late July and hadn’t closed below that mark since July 29. Until Friday, that is, when it closed at $39.77, down 4% for the week. That broke a four-week winning streak and also suggested demand might be flagging. And the new week begins with even more crude weakness, with the October futures contract (/CLV0) down another $2 and change. Crude can sometimes be a barometer for the economy, just like TSA travel data, so we’ll keep watching it for possible clues.

The data calendar has a couple key reports later this week. Those include the Producer Price Index (PPI) on Thursday and the Consumer Price Index (CPI) on Friday.

Typically, investors watch inflation very closely for hints at how it might affect Fed policy. That might not be the case this time around after Fed Chairman Jerome Powell last month indicated the Fed would likely be comfortable letting inflation go above its 2% target if that’s what helps bring unemployment down. We’ll talk more about analysts’ predictions for the inflation reports as the week goes on.

Be on the lookout for Lululemon Athletica Inc (NASDAQ: LULU) earnings, expected this afternoon. The retail segment had a pretty good quarter, considering everything it’s up against. Oracle Corporation (NYSE: ORCL) and Kroger Co (NYSE: KR) are expected to report later in the week. 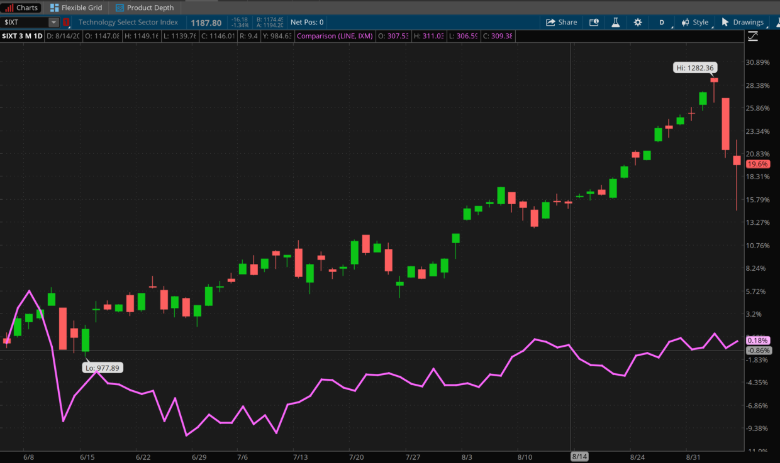 CHART OF THE DAY: “MIND THE GAP” NARROWS: This three-month chart comparing Info Tech (IXT—candlestick) to Financials (IXM—purple line), is finally starting to close slightly after Tech got slammed last week and Financials found some strength. We’ll have to keep revisiting this comparison in coming weeks for more indication of whether investors are heading back toward “value” areas of the market. Data Source: S&P Dow Jones Indices.  Chart source: The thinkorswim® platform from TD Ameritrade. For illustrative purposes only. Past performance does not guarantee future results.

Widening Yield Curve? Auction Action Ahead: Treasury yields fell with stocks early Tuesday, back below 0.7% for the 10-year note. This comes ahead of some closely-watched auction activity this week. The Treasury plans to sell $35 billion of 10-year notes and $23 billion of 30-year bonds on Wednesday and Thursday, respectively, Reuters reported. The prospect of new supplies (maybe combined with memories of lukewarm demand for low-yielding bonds in an auction last month) seemed to pressure fixed income on Friday, helping raise the closely-watched 10-year yield to 0.72% by the end of the day. That’s about nine basis points above Thursday’s lows, and could also reflect the strong jobs report Friday.

The closely-watched “yield curve,” or gap between 10-year and two-year notes, reached 56.4 on Friday afternoon, up about six points from Thursday. That’s often a sign of economic strength.

Rising yields—if they move up after Tuesday morning’s setback— could set up a nice scenario for Financials and other cyclical stocks that tend to do better when the economy grows. On Friday, there appeared to be some rotation into Industrials and Financials, while Tech stocks again came under pressure. Financials and Industrials, along with Materials, were the only sectors that gained ground Friday.

Lessons Learned: Now that everyone’s back from a long and hopefully relaxing holiday weekend, it’s time to think about lessons from last week’s sudden market plunge. One big thing people learned is how quickly momentum can change to the downside. Another is that the selloff coincided with negative tidings from Capitol Hill on possible stimulus. Whether or not you personally believe another fiscal package is needed, evidently many investors would like to see one.

Lesson three is that, once again, volatility might have signaled a major market move. The Cboe Volatility Index (VIX) rose early last week even as stocks rallied, and to some veteran traders, that might have indicated some sort of momentum shift ahead. Then on Friday, after peaking above 38 (its highest level in three months), VIX got absolutely slapped down back toward 30. VIX is still very elevated historically, so more choppy trading could be around the corner, especially if volume doesn’t return more quickly.

Back to Work Slowly: Buried deep in last Friday’s August payrolls report was an interesting  nugget that tells us something about the reopening economy and what may be long-term problems ahead. In August, 24.3% of employed people teleworked because of the coronavirus pandemic, down from 26.4% in July, the Labor Department said. This slight downturn obviously reflects some businesses opening their doors again as the virus shutdown eases in many states, but it’s still a really high number. Who would have thought 10 or 20 years ago that we’d ever see a stat like this?

And if it continues even at, say, half the current level after the pandemic, it could really be an anchor pressuring local economies. Think of all the restaurants and stores in downtown areas that depend on a steady flow of lunch customers. Or the public transit systems designed to get people downtown and back every day. If there’s a permanent drop of even 10% in people working in offices, cities and their municipal governments and their employees are going to probably continue to suffer, with ramifications for employment and maybe tax revenue. Just anecdotally, seeing Chicago’s “Magnificent Mile” so quiet last week with stores boarded up on Michigan Avenue shows there’s a long way to go in this recovery.

On a positive note, the August payrolls report overall looked very good. Job gains are slow but steady which is actually a perfect thing to see overall.

Photo by Charlie Deets on Unsplash