In the department of market cliches, we’ve moved from last week’s “Tech wreck” to this week’s “oil spill,” though there was a nice bounce last night.

Actually, fans of the first term can still use it, because when everything from yesterday’s ugly session gets added together, Tech still held the honor of worst-performing sector, even though Energy gave it a run for its money. The FAANMGs—FAANG stocks plus Microsoft Corporation (NASDAQ: MSFT)—took a beating, but compared with what Tesla Inc (NASDAQ: TSLA) just experienced with Tuesday’s 21% haircut, it was almost a walk in the park for most other stocks.

We’ll see if things improve today as stock index futures point toward a more positive open, including for the Nasdaq 100 (NDX)—which just suffered a 10% correction in only three sessions. Apple Inc. (NASDAQ: AAPL) and TSLA are both in the green in pre-market trading as the NDX appeared to hold its 50-day moving average of just below 11,000 (see chart below). Even crude is getting a little bounce from three-month lows posted yesterday.

All that being said, at some point it seems likely these gains could be tested again today. It’s unclear when that might happen, but if it does, we’ll see if the market can pull together another bounce.

The main focus today might be on vaccine jitters after AstraZeneca plc (NYSE: AZN) halted its COVID-19 trial yesterday due to a possible adverse reaction.

As Market Lists, Here’s A List Of Possible Reasons Why

Although the tone feels more positive this morning, it’s important to get a sense of what led to the correction. Here are some possible reasons, and why investors should remain careful but also keep things in perspective.

Tech titans fell toward Earth the last three sessions. What about other stocks that reflect the broader economy and also are playing defense? That’s where the “oil spill” metaphor arguably comes in.

Crude began slipping last week even before equities hit the dirt, and that might have made people nervous about the economy in general. Crude is often a barometer for economic vitality, and an attempt to move above the narrow long-term range failed late last month. Now it’s tumbled all the way back to nearly three-month lows (see more reasons for that below).

Along those lines, Energy stocks took a dive yesterday, with the Energy Equipment and Services sub-sector hurt most. Financials got hit as some investors may have been attracted by the temporary “safety” of bonds, even though no investment is truly safe.

In the long run, seeing valuations come down in Tech could have a healthy impact. It’s typically been better for stocks historically when there’s a more broad-based, slow-building climb instead of one sector dominating everything on speculative buying while most others spin their wheels.

Basically, between March and the end of August, investors enjoyed what would typically be a bull run that takes several years to play out. That might reflect all the fiscal and monetary stimulus more than any hope for improved fundamentals, like earnings. A lot of veteran market watchers would probably prefer to see stocks trade on their fundamental strengths and weaknesses, but some analysts argue the current environment makes those less of a factor.

Are Things Really That Bad?

Perspective is important. No one can predict where things might go from here, but even with this three-day drawdown, the S&P 500 Index (SPX) is basically back to levels just under the record highs posted before the pandemic, and at roughly one-month lows. The SPX is about flat over the last month and still up year-to-date, which is a pretty huge victory considering everything the world’s gone through.

The Nasdaq (COMP), which is more heavily exposed to Tech, was below its current level as recently as Aug. 10. Also, transports and small-caps, sometimes seen as canaries in the coal mine for the broader market, didn’t get slammed as hard as their big brother indices on Tuesday.

Also, while bonds did rise, it wasn’t a really meaningful gain and yields remain above last week’s lows. Typically, lower yields reflect investor worries about the economy. Yields ticked up just a bit this morning but remain below 0.7% for the 10-year Treasury.

Volatility, another indicator of market stress, barely moved Tuesday despite the dramatic plunge in stocks. The CBOE Volatility Index (VIX) ended the day near 31, well below the highs of 38 seen last week, though still historically elevated. Failure of VIX to spiral upward as stocks came down Tuesday could be interpreted as a smoke signal that most investors don’t expect things to get much worse. Though as Yogi Berra said, you never know.

What Did Retail Investors Do In August?

It was the best August for the SPX in more than three decades, and investors tracked by TD Ameritrade’s Investor Movement Index® (IMXSM), were net-buyers overall. The IMX increased to 4.93 in August, up 6.48% from its July score of 4.63. The IMX is TD Ameritrade’s proprietary, behavior-based index, aggregating Main Street investor positions and activity to measure what investors actually were doing and how they were positioned in the markets.

The market had an incredible run as Technology stocks led the way, and TD Ameritrade clients used this opportunity to increase their exposure to the market for the sixth month in a row, in many cases as buyers of these market-leading technology stocks. 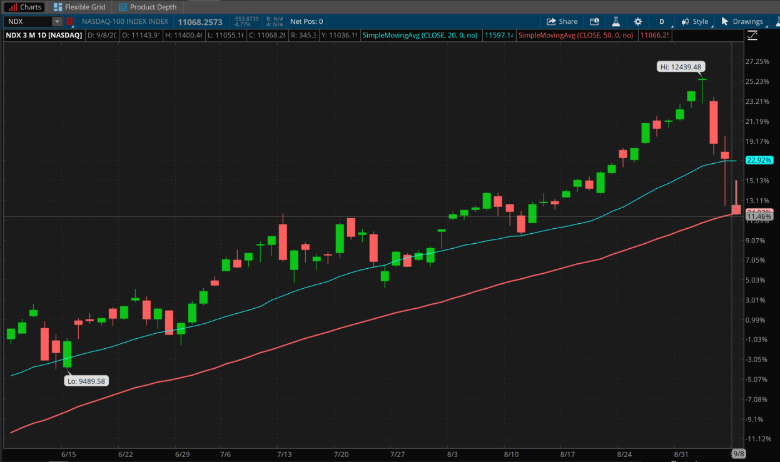 CHART OF THE DAY:  Chart source:  PLEASE SIR, MORE SUPPORT? The Nasdaq 100 (NDX—candlestick) dropped below technical support at last week’s lows and the 20-day moving average (blue line) on Tuesday. It’s now right above the 50-day moving average, which is near 10,900 (red line). NDX settled right at the 50-day moving average Tuesday, but after an overnight bounce, the level looks to have held. Chart watchers might see this level as a support point for any subsequent down move in NDX. Data Source: Nasdaq. The thinkorswim® platform from TD Ameritrade. For illustrative purposes only. Past performance does not guarantee future results.

Going Anywhere? Travelers Are, but Energy Can’t Catch a Break: You could point to a bunch of possible reasons why crude plummeted to start the week. Saudi Arabia reduced selling prices, European economic data have weakened, it’s the end of “driving season” in the U.S., OPEC appears to be on track to reduce production cuts as it planned, and refining margins are weak, driving down industry demand for crude.

That said, U.S. demand didn’t look horrible recently. On Labor Day, about 935,000 U.S. travelers went through Transportation Security Administration (TSA) checkpoints, down from nearly 2.3 million on the same day a year earlier. That 59% Labor Day drop compared pretty well with an 86% plunge on Memorial Day and perhaps points to better times as Thanksgiving and Christmas approach, barring another spike in virus cases.

Still, when people aren’t traveling even half as much, fuel demand tends to suffer. Tomorrow’s weekly data from the Energy Information Administration (EIA)—delayed one day due to the holiday—might give more insight. Gasoline demand the previous week fell by 4 million barrels from a year ago, and crude inventories are 14% above the five-year average.

One More Take on Jobs Report: Arguably the most positive thing in last week’s jobs report with possible impact going forward is the gain of 78,000 positions in transportation and warehousing. The category is still down by 381,000 since February, but when you see job gains there it means demand is increasing everywhere and not just people ordering from Amazon.com, Inc. (NASDAQ: AMZN). We’ll have to track whether data in some of the coming reports, like August retail sales a week from now, back this up.

There might have already been some verification from the August NFIB Small Business Optimism Index, which climbed above its historic average and showed job creation plans rising. We’ll have to see if that kind of positive energy lasts without more stimulus for small business from Washington, D.C.

No Tree Grows to the Sky: After an incredible runup in recent weeks, shares of Tesla Inc (NASDAQ: TSLA) have been in retreat, punctuated by yesterday’s 21% selloff, exacerbated in part by the announcement by General Motors Company (NYSE: GM) of its planned partnership with auto-tech newbie Nikola Corporation (NASDAQ: NKLA) as it ramps up its foray into electric- and hydrogen-powered cars. The auto industry in 2020 offers a great example of how valuations are a combination of overall industry growth and individual company market share.

Is TSLA’s 1200 P/E justified? Perhaps. Does it make sense for NKLA shares to be up 27% with its GM tie-up? Perhaps. And speaking of GM, does its recent strength—with shares up about 25% over the past few weeks—amid its plans to rejoin the race to build alternatives to the internal combustion engine—make sense? Perhaps. But all of those things at the same time? That’s a tough sell.

TSLA’s meteoric growth is arguably predicated on it eventually owning the auto market, (and just as importantly the battery technology), evidenced by its recent surpassing of Toyota Motor Corp (NYSE: TM) as the world’s most valuable carmaker. But in a mature industry such as automakers, the overall market is finite, so to some degree, growth of one firm comes at the expense of sales at all the others. The market share total of all auto companies will always be 100%. Nothing more, nothing less.

Photo by Medhat Dawoud on Unsplash