MENLO PARK, Calif., Sept. 10, 2020 /PRNewswire/ — Employers have a growing list of concerns lately, including losing their top performers, new research from global staffing firm Robert Half shows. A large majority of senior managers surveyed (88%) said they are worried about their company’s ability to retain valued staff, with 47% being very worried. Of those who said they are worried, 39% attribute their concern to salary reductions or planned salary freezes for the near future. 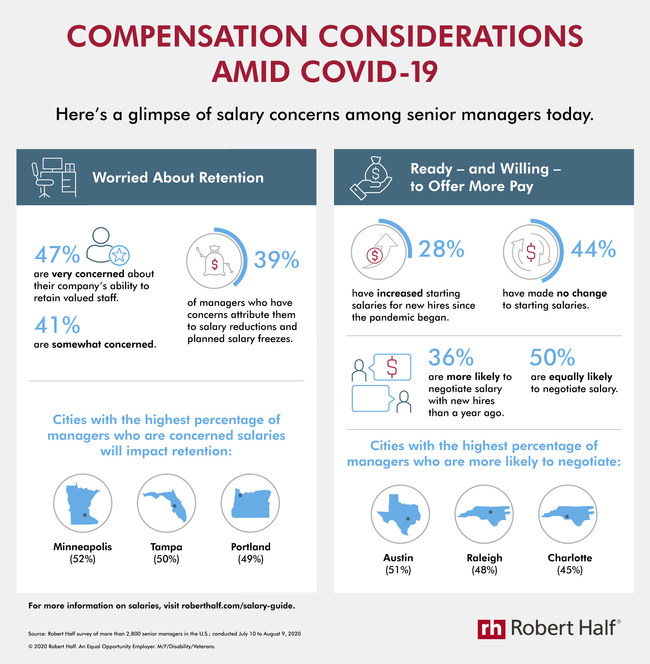 New research from Robert Half reveals salary-related concerns among employers amid the pandemic.

The research comes in conjunction with the release of the Robert Half 2021 Salary Guides, which provide starting salary ranges for more than 470 positions in the accounting, finance, technology, creative, legal and administrative support fields.

View an infographic of the research highlights.

Among the 28 U.S. cities in the survey, Minneapolis (52%), Tampa (50%) and Portland (49%) have the highest percentages of senior managers who said they are concerned about retention because salaries have been slashed or raises are off the table for the time being.

“Employees have been stretched to the limit during the pandemic, putting in longer hours and taking on additional responsibilities,” said Paul McDonald, senior executive director of Robert Half. “While many companies have supported staff by providing more nonmonetary benefits, like flexible scheduling and enhanced wellness resources, they may have had to impose pay freezes or cuts in order to preserve jobs.”

The Current State of Salaries for New HiresEven in a time of high unemployment, the research shows a majority of companies are offering new recruits pay that meets or exceeds pre-pandemic numbers. More than 4 in 10 senior managers surveyed (44%) said starting salaries for new hires have held steady since the spread of COVID-19 began, and nearly 3 in 10 respondents (28%) noted an increase in base compensation.

“Companies struggle to find the talent they need to support new business priorities sparked by the pandemic. Professionals with in-demand skills know they still have options, and employers realize they need to offer competitive salaries to attract and secure top candidates,” McDonald explained.

Willingness to Negotiate Pay With CandidatesMore than 8 in 10 senior managers (86%) noted they are as likely to negotiate salary with new hires today than a year ago. Of those, 36% said they are more open to discussing starting pay with candidates now, compared to 12 months ago.

Austin (51%), Raleigh (48%) and Charlotte (45%) have the highest percentages of employers who are more willing to discuss pay with potential hires than they were a year ago. In addition, managers at midsize companies (500 to 999 employees) are more likely to negotiate salary today versus 12 months ago (44%), while those at small firms (20 to 99 employees) are least likely to engage in back-and-forth about compensation (28%).

“Professionals are savvier about salary trends than ever before, and many candidates are comfortable talking about pay early in the interview process,” McDonald noted. “Employers should research compensation trends regularly and be prepared to move quickly and negotiate as soon as they come across promising talent.”

Visit the Robert Half Salary Calculator to see starting salary ranges for hundreds of positions adjusted for local markets.

About the ResearchThe online survey was developed by Robert Half and conducted by an independent research firm from July 10 to August 9, 2020. It includes responses from more than 2,800 senior managers at companies with 20 or more employees in 28 major U.S. cities.

About the Salary GuidesRobert Half has reported on salaries since 1950. Information in the Salary Guides is based on the thousands of job searches, negotiations and placements managed by Robert Half’s staffing and recruiting managers. Continuing or ongoing salaries are not reported because many external factors — such as seniority, work ethic, job performance and training — impact the salaries of full-time professionals as work histories develop.

About Robert HalfFounded in 1948, Robert Half is the world’s first and largest specialized staffing firm. The company has more than 300 staffing locations worldwide and offers hiring and job search services at roberthalf.com. For additional management and career advice, visit the Robert Half blog at roberthalf.com/blog.

Atradius: Will COVID legacy threaten profitability of European business in 2021?