Investors appeared to be optimistic on Monday morning, helping stocks continue their climb from late last week. Momentum from Friday’s strong finish on Wall Street seemed to spill over into international markets, and it’s good to see that momentum carrying over into another U.S. session.

As the third quarter approaches its end, we may be seeing some buying as market participants want to include stocks on their books that have done well during the quarter. Data showing continued growth in Chinese industrial profits seemed to be helping sentiment.

Investors hoping for a stimulus bill that could end up helping consumer spending have gotten some good news as House Speaker Nancy Pelosi and Treasury Secretary Steven Mnuchin have indicated they’re moving forward with talks on a stimulus deal. While that progress seems to be cheering investors, it’s tough to say for sure that a deal will get done, especially with a Supreme Court justice nomination also in the cards.

With uncertainty about a stimulus bill and other issues looming ahead of the November election, it seems likely that choppy trading could continue. Coronavirus cases are rising in many U.S. states, and investors are generally in limbo when it comes to guidance from corporate earnings reports. Additionally, coronavirus cases have been on the rise in western Europe, raising questions about its economy.

September, true to its historical form, has been tough for the market and has been marked by volatility led by flows into and out of big tech-related companies.

The S&P 500 Index (SPX) has dropped for four consecutive weeks but still remains well-elevated from its low point in March. Although a rebound in tech-related names helped the Nasdaq Composite (COMP) gain ground last week and snap a three-week skid, volatility in technology names has had the market on edge recently.

Given the concerns about another surge in coronavirus cases, it probably doesn’t come as too much of a surprise that stay-at-home names were among last week’s winners, with Zoom Video Communications Inc (NASDAQ: ZM) gaining more than 13% and Peloton Interactive Inc (NASDAQ: PTON) Rising around 9%.

What might be more of a surprise is that gold futures fell 4.8% for the week. With the SPX on the back foot and all those uncertainties we talked about above, you might think investors would be buying up gold in its traditional role as a safe-haven investment.

But keep in mind that the dollar has also been gaining amid worries about what a coronavirus resurgence might mean for European currencies. The strengthening greenback has made dollar-denominated gold less attractive for holders of other currencies (see chart below).

Looking Ahead At Earnings, Economic Calendar

Earnings season starts up in earnest in a couple weeks, beginning with the megabanks—JPMorgan Chase & Co. (NYSE: JPM), Wells Fargo & Co (NYSE: WFC), Goldman Sachs Group Inc (NYSE: GS) and others—expected to report the week of October 12. Considering the Financial sector’s reach into other sectors of the overall economy, these big bank earnings often set the tone for the entire earnings season.

Before then, we’ll get some earnings tidbits to help guide expectations before the flurry. Chipmaker Micron Technology, Inc. (NASDAQ: MU) reports tomorrow after the bell, and analysts are keeping a close eye on pricing and pricing margins, as well as any forward guidance that might be offered up. Semiconductor stocks—which have seen their share of volatility in the last 12 months—can be a harbinger of business and consumer spending in the short and medium-term.

Then on Thursday, we’ll see a few Consumer Staples biggies—PepsiCo, Inc. (NASDAQ: PEP), Constellation Brands, Inc. (NYSE: STZ), and Conagra Brands Inc (NYSE: CAG)—that could offer clues as to the state of the consumer and consumption trends. These three companies own dozens of “household name” brands in the food and beverage industry.

Moving to the economic calendar for the week ahead, releases include a consumer confidence reading for September on Tuesday, the government’s third estimate for second-quarter GDP on Wednesday, and personal consumption expenditure inflation data for August and a September manufacturing index reading on Thursday.

Arguably the biggest data release that investors will likely be watching this week is the September nonfarm payrolls report, which is due out before the opening bell on Friday. Along with those numbers comes the unemployment rate, which remains high but has been on the decline. (See more on unemployment below.) 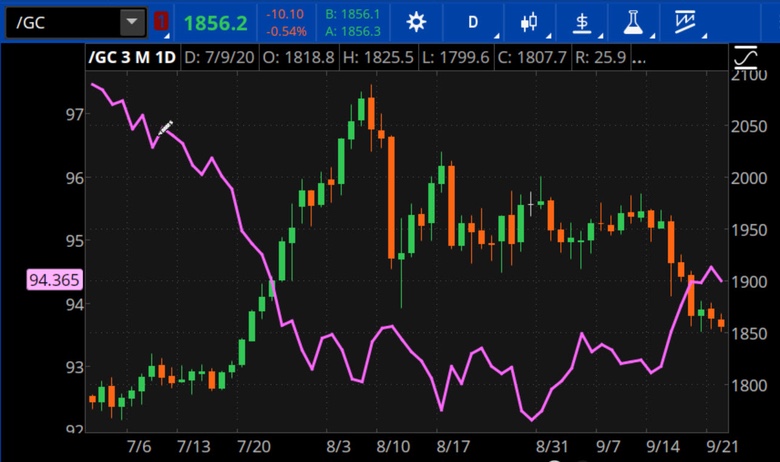 CHART OF THE DAY: GOLD LOSES LUSTER; BUCK BOUNCES: Gold futures prices (/GC—candlestick) have been under pressure as the greenback has gained ground. The U.S. Dollar Index ($DXY—purple line) has been on the rise amid worries about a resurgence of coronavirus in Europe. Gains in the buck can dampen demand for dollar-denominated gold. Data sources: CME Group, ICE Data Services. Chart source: The thinkorswim® platform from TD Ameritrade. For illustrative purposes only. Past performance does not guarantee future results.

Will Unemployment Decline Continue Uninterrupted? After spiking to 14.7% in April, the U.S. unemployment rate has declined each month, with the most recent reading coming in at 8.4%. That’s still pretty high if you remember that the rate was at 3.7% in Aug. 2019 and even lower at 3.5% in Sept. 2019, which is the comparative month for the report that comes out on Friday. Along with the improving headline unemployment numbers, the labor force participation rate—which basically means all Americans eligible to work in the regular (non-military) economy—has also been improving. The figure, which also includes people looking for work, sank to 60.2% in April and rebounded to 61.7% in August but still remained well below the 63.2% we saw in both August and September 2019. Although both the declining unemployment rate and the increasing labor participation rate are signs of an improving labor market, we’re still a long way from where we were before the pandemic.

Pace of Jobs Growth Slows: Although much of the stock market’s rally after the pandemic-led selloff has been brought about because of ultra-easy Federal Reserve monetary policy, there has also been some encouragement from generally improving economic conditions. But one of the uncertainties as the pandemic continues is whether the gains in economic indicators will plateau. Let’s keep talking about this week’s jobs report for an example. After losing more than 20.7 million jobs in April, the economy has been adding them back. Still, the pace of job gains has been slowing. In June, the economy added more than 4.7 million jobs, but Friday’s report is expected to show a gain of just 800,000 for September, according to a Briefing.com consensus estimate. While this may already be baked into the proverbial cake, a headline number showing much more of a slowdown in jobs growth than expected might be taken negatively by the market.

New Jobless Claims Accelerate Again: While the moderating number of job additions to the economy is arguably a reason for concern, it seems to be even more so in light of the jobless claims figures from last week. Initial claims rose to 870,000 for the week ending Sept. 19, not that far off from the 884,000 we saw toward the end of August. The stagnation in the decline in new jobless claims suggests that more economic pain because of the pandemic could continue for some time. This is also coming at a time when more people may be looking for work now that the $600-per-week federal unemployment boost has been absent for some time and Congress hasn’t passed a new stimulus package.

Photo by Rahul Chakraborty on Unsplash

Mexico's Cannabis Legalization Bill Will Boost Business, But There Are Concerns