MIAMI, Oct. 30, 2020 /PRNewswire/ — Grammy award-winning superstar Nicky Jam will take the stage at Bardot Live in Miami’s Wynwood neighborhood on Saturday, Nov. 14 for a virtual concert. The show will stream worldwide exclusively on the GlobalStreamNow App. Nicky will perform his greatest chart-topping hits and songs from his latest album, Infinity. 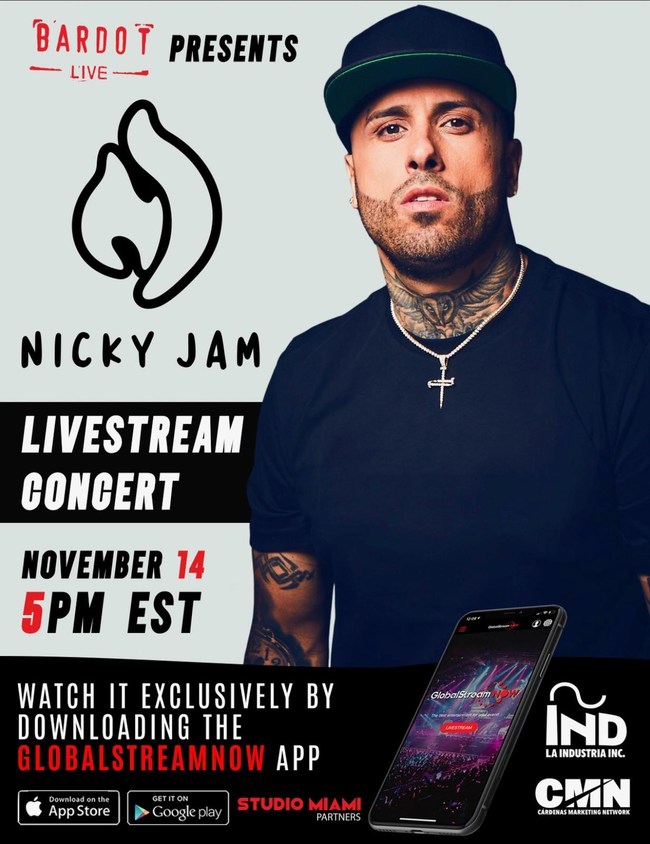 One of the most prolific artists in reggaeton and Latin trap, Nicky Jam is a charting, award-winning singer and songwriter who has collaborated with a long list of performers, including superstars such as Daddy Yankee, Farruko, J Balvin, and dozens of others in addition to his solo material. He has received a number of accolades including the iHeartRadio Corazón Latino Award, which honored him for all of his contributions and philanthropic efforts to the Latinx community, and Premios Tu Música Urbano Special Achievement Award, which recognized him for his impressive career as one of the early pioneers of reggaeton, leading to his current success as an influential multi-platinum, crossover artist who has paved the way for a new generation of artists. Jam has earned countless nominations and awards, including most notably the Billboard Latin Music Awards Latin Rhythm Song of the Year, iHeartRadio Music Awards Latin Song of the Year, and Latin Grammys Best Urban Performance and Album of the Year.

Bardot Live is a next-generation live entertainment venue and creative space transforming the way people experience music. Located in Miami’s Wynwood Art district and founded on the mission of transforming the way people experience and create music. They have partnered up with GlobalStreamNow, a leader in the Live Streaming Industry to bring this concert to your Mobile Phones, Tablets and Desktops.

The idea for this livestream series of concerts was conceptualized by power-couple Yunexy Eloy, Managing Partner at Bardot and Maureen Kragt, Marketing and Communications director for the Influencer Awards held in Monaco every year. Their combined experience and network will make it easy to develop the Bardot Live concept into a Global Brand.