If there’s a theme this week, you could argue it’s watching people return to work and seeing how various states and countries deal with the challenges as they try to get going.

Tensions rose overnight on reports of more COVID-19 cases in South Korea after the country began easing restrictions. You don’t have to look far to find people worried about a second wave, with some experts warning about more danger ahead.

There isn’t a lot of data or earnings on the calendar, so it could be one of those sessions where people look for the latest headlines and trade-off the news of the day. That’s very difficult to trade, and means the potential for volatility is there. With that in mind, investors probably don’t want to get too complacent.

Crude had a weird night, falling initially and then clawing back this morning. It’s tempting to see crude as a barometer for stocks, but really crude is more of an interesting sidelight right now, not a driving factor.

Overseas markets are mixed and not providing much of a clue, but U.S. stocks seem like they’re taking their cue from Europe’s weakness. Stocks have come a long way very fast, up 33% from the late-March lows. It wouldn’t be surprising to see some consolidation at the current levels, especially when you consider how the S&P 500 Index (SPX) is closing in on 3000 again.

The biggest bulk of earnings is now in the rear-view mirror, so the market might be taking a breath after last Friday’s impressive rally. Looking at the corporate picture, one thing that stands out is United Airlines Holdings Inc (NASDAQ: UAL) decision to call off a planned $2.5 billion bond offering. The company made the decision after finding “tepid interest” and facing a possible 10% interest rate, the Financial Times reported.

How Strong is the Foundation?

Some might look at Friday’s rally and point out that it was on lower volume. It was, no doubt. However, we’re getting back near levels where all the selling started in February, and at some point, if this keeps happening, bears might start to feel the squeeze.

Anyone who found reasons to wait before jumping back in could be regretting it at this point. Some of those people remain outside waiting for a selloff to take things down again so they can find a better place to enter. So far, that strategy hasn’t worked. There will be challenges ahead (see below), and the question starts to be if a sell-off does happen, does it happen from here or from 300 points above here in the SPX? That’s hard to say.

The SPX is nearing some technical resistance. It closed Friday just under 2930, which puts it a short ride from a zone between 2940 and 2950 that marks the area it retreated from earlier this month. It’s also near a peak it hit in late 2018 before getting wrestled down in a huge Q4 sell-off. A punch through 2950 could look positive on the charts, and it’s also constructive that the Dow Jones Industrial Average ($DJI) finished the week above resistance at 24,250. The 24,000 level has been a tough one for the $DJI so one thing to watch this week is if it can continue to trade above that.

Friday’s rally was especially impressive because it came ahead of the weekend and because it accelerated into the close. There was a point late in the day when it looked like sellers might gain traction, but then came news of Apple Inc. (NASDAQ: AAPL) planning to reopen stores in four states over the next week. Most of the strength from that got reflected in AAPL shares rather than the overall market, but there was some spillover. If that’s the excitement stirred by four states, imagine when the other 46 see openings.

Which brings us to a fork in the road: The end of May is when a lot of states reach preset deadlines to either reopen or extend closures. If many decide they need more time, it could spark selling because right now most of the excitement is over possible reopenings. Extensions would be a big disappointment for the market.

The next two weeks are likely to remain news-driven. Negative headlines could send us down very quickly, sometimes without a lot of rhyme or reason. We’re set up this way because right now the market has a lot of weak longs or people who bought without much conviction and might exit without waiting around for more explanation.

Despite last Friday’s absolutely abysmal payrolls report that clearly showed the tragic situation for U.S. workers, there’s a sense of optimism around the market that when we get back to work, things can return pretty well. Ideas that the payrolls report threw down the worst possible data and got it out of the way helped reinforce that. Right now we are trading a lot on optimism.

It remains to be seen if the optimism is justified, and some analysts continue saying the market has gotten ahead of itself. You could definitely argue that on the basis of earnings. S&P Capital IQ now sees Q1 S&P 500 earnings falling 12.1% from a year ago, followed by a massive 41.3% earnings cratering in Q2 and 22.2% losses for the year as a whole. It does see a 29.2% bounce in earnings next year, though that will be off very easy comparisons.

If earnings do fall that much this year, it would make the SPX’s current forward price-to-earnings ratio look historically high at more than 22. That compares with around 19 before the pandemic and recent lows of around 14 in December 2018. The historic average is closer to 16.

One argument in favor of a high P/E is the tailwind from easy monetary policy. On the other hand, you could say that even with the Fed’s help, the market appears priced for perfection and remains top-heavy due to the huge weightings on major indices from a few major Information Technology stocks that have thrived despite the crisis. The FAANGs and semiconductors continued rising Friday, with many back to or even above pre-crisis levels. The PHLX Semiconductor Index (SOX) is up 38% from its March low.

It was a relief to see some of the more unloved sectors get a little positive feedback toward the end of last week. Materials and Industrials were among those that did well on Friday. Also, the 10-year yield ran up some gains Friday to close at 0.68%, near its high for the week but still incredibly low on a historic basis. Volatility also fell, with the Cboe Volatility Index (VIX) finally falling below 30 on Friday for the first time in about two months. It hit highs above 80 in late March.

Looking back at Friday’s jobs report, it was better than expectations, but that means nothing. The jobs report to really watch is the one for June that comes out in early July. That’s because expectations are that in June we could have a lot more states back to work.

The test going forward will be healthcare, because hopefully dentists’ and doctors’ offices reopen. The government lost jobs, and that is all school-related, so you would think those would come back. One concern is manufacturing and construction—do those jobs come back?

If you’re trying to find anything positive about the data, Briefing.com points out that many of the newly unemployed—18.1 million—describe their situation as being on temporary layoff. That drives hope that some of these jobs could return relatively quickly.

No really major data are on todays’ calendar, by the way. Inflation and retail sales numbers come in later this week. It’s a quiet week for earnings, but a couple of the major cruise ship lines report Thursday, which could stir up the waters a bit. 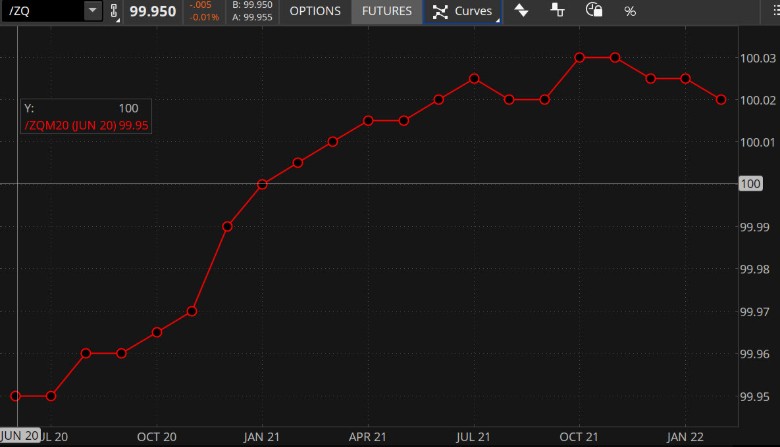 CHART OF THE DAY:  NOT HERE? NOT YET, ANYWAY. The Fed funds target, set at a range between 0% – 0.25%, is expected to remain intact throughout 2020. Beginning with the Feb 2021 contract, however, futures are pricing the possibility of negative interest rates, with each monthly contract in 2021 trading above par value (100—white line) on Friday. Data source: CME Group. Cboe. Chart Source: The thinkorswim® platform from TD Ameritrade. For illustrative purposes only. Past performance does not guarantee future results.

Future Temps: Below Zero? In a recent post-meeting press conference, when asked about the possibility of negative interest rates in the U.S., Federal Reserve Chairman Jay Powell told the crowd, “We do not see negative policy rates as likely to be an appropriate policy response here in the United States.”

As of last week, the market may have a different opinion. CME Group’s FedWatch tool, which uses CME Fed Funds Futures contracts to gauge the likelihood of policy changes, has priced in essentially 100% certainty that the Fed funds target will stay in its current range (between 0% and 0.25%) for the remainder of the year. But contracts expiring in 2021 actually traded above 100 on Thursday and Friday (see chart above). Since the contract’s specs are 100 minus the rate, anything over 100 is essentially a negative rate.

While that’s no guarantee the Fed will ever push the rate into negative territory, it’s certainly something to keep an eye on. There was once a time when the ECB, Swiss National Bank, and Bank of Japan—among other central banks—had no intention of shifting to a negative rate policy, but as they say, necessity is the mother of invention.

Will the Magic Happen? One landmark event is today’s reopening of Walt Disney Co’s (NYSE: DIS) Shanghai Disneyland, which saw advance tickets sell out in minutes last week. Visitors will be required to wear face masks at all times, unless they’re eating, news media reported. Shanghai Disneyland says it’s taking “a deliberate approach” as it reopens. It will require physical distancing and sharply reduce capacity. No “selfies” with Mickey and Minnie or any other beloved character will be allowed, in case you were wondering.

Though it’s just one theme park, it could be constructive to see how the reopening goes for a sense of how things might go here if DIS gets a chance to start up its U.S. parks again. Will people keep coming after the first day’s festivities? How will social distancing measures work? DIS has tickets on sale for Florida’s Walt Disney World starting June 1, but hasn’t officially declared that the reopening date.

Biotech Quietly Roars: The Nasdaq Biotechnology Index (NBI) bottomed on March 16 and is up 37% from then. Biotech got another boost last week  as shares of Moderna Inc (NASDAQ: MRNA) soared on news of its COVID-19 vaccine candidate moving into Phase II clinical trials. While biotechs have been on the frontlines of vaccine research, don’t forget that big pharma also plays a role. Both Johnson & Johnson (NYSE: JNJ) and Pfizer Inc. (NYSE: PFE) are in the hunt. Though it could take many months for any of these to be proven, it’s encouraging to see the mammoth effort companies are making, and signs of progress. This could be adding to the improved “animal spirits” on Wall Street lately.

Photo by Alonso Reyes on Unsplash