BartDay
Home Economy The Economies Most Reliant On Trade

These countries rely the most on trade, according to the data from the World Bank.

The World Bank defines trade as the sum of exports and imports of goods and services in a country. In order to measure trade, this sum is viewed as a share of the gross domestic product (GDP).

Trade is a vital part of any economy, no matter how big or small. Most prominently, trade increases competition. This, in turn, keeps world prices at relatively optimal levels. Competition also breaks monopolies, encourages innovation, and brings in new jobs.

Apart from the exchange of goods and services, trade brings in new technology and facilitates the transfer of knowledge between countries.

In 2018, the World Bank computed the trade of the countries in the world as a percentage of their GDP. Statista visualised the trade of selected economies in their recently published chart. Let’s look at some insights that we can derive from it. 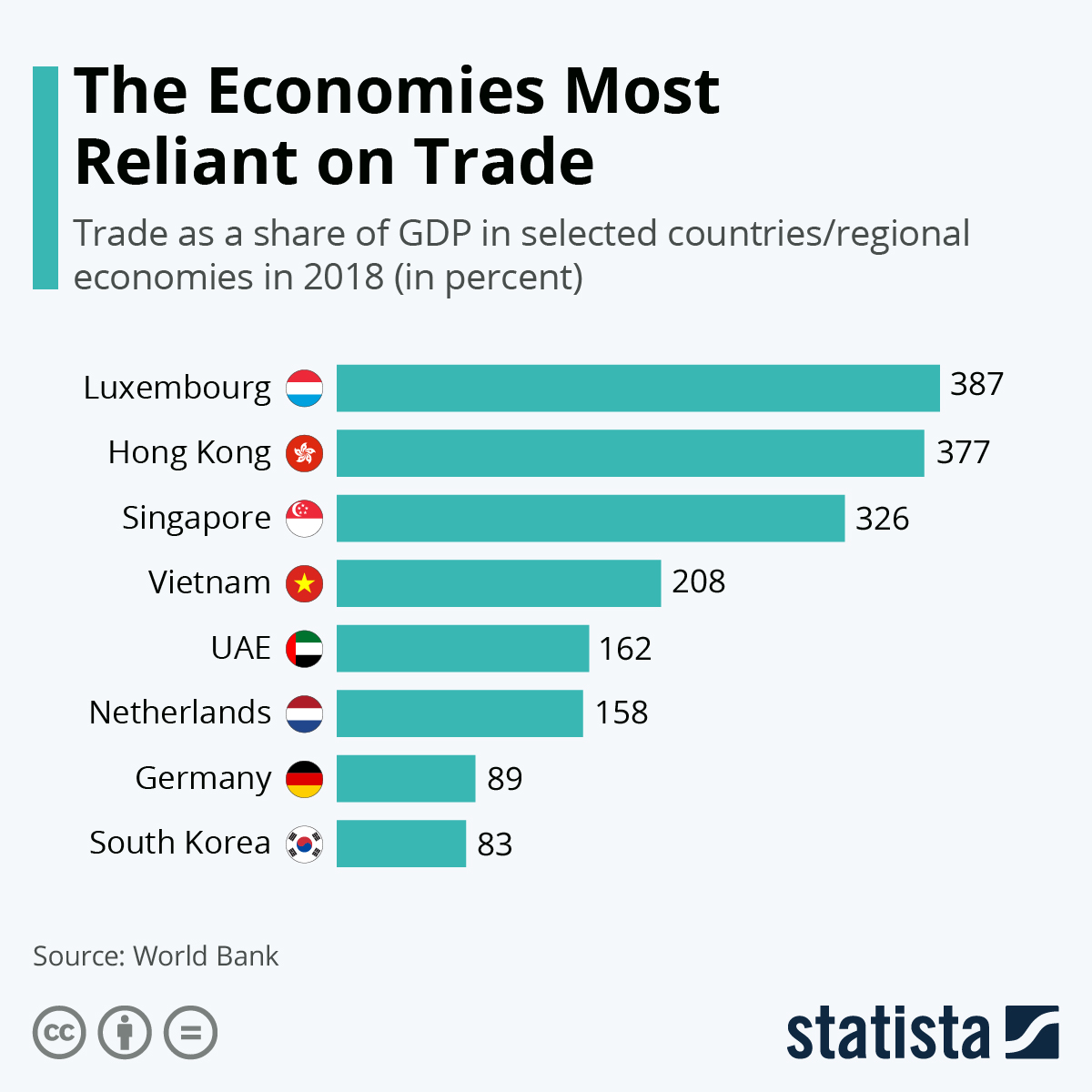 As we can see from the chart above, trade sizes across the world’s economies are highly varied. It can also be observed that a lot of countries with exceptionally high trade sizes have small land sizes. In fact, Luxembourg is among the smallest sovereign states in Europe. Hong Kong and Singapore which both recorded extremely high trade levels are also small countries.

For a country, a small land area equates to smaller space for resources and production. In order to bring in services and goods that cannot be produced locally, they naturally turn to trading.

Trade in the world is computed to be at 59.44% of the global GDP. As we can see in the graph above, this figure follows the increasing trend observed in the previous years.

The practice of trading has been mostly beneficial for countries. However, recent changes and disruptions are revealing its vulnerabilities.

With restrictions on international flights and crossing borders as well as the general disruption in economic activity, the COVID-19 pandemic has placed a huge strain on trade. The World Trade Organization (WTO) expects global trade to decline by between 13 percent and 32 percent in 2020.

With China’s plan to pass a national security law that would limit the liberties of those in Hong Kong, the latter’s trade is likely to suffer. One of the biggest damages for the global financial centre would be the possibility of the United States imposing the trade restrictions that it did on China.

Conversely, the events between Hong Kong and China will also affect the United States, especially the consumers. In 2018, the value of the U.S.-Hong Kong trade is valued at USD 67 billion.  Should the U.S. handle trading with Hong Kong the same way as China, the prices of goods will increase.

U.S. Services Index Unexpectedly Pulls Back Off All-Time In April