BartDay
Home Economy The Biggest Economies In The World

These are the countries with the highest global GDP  according to the International Monetary Fund. 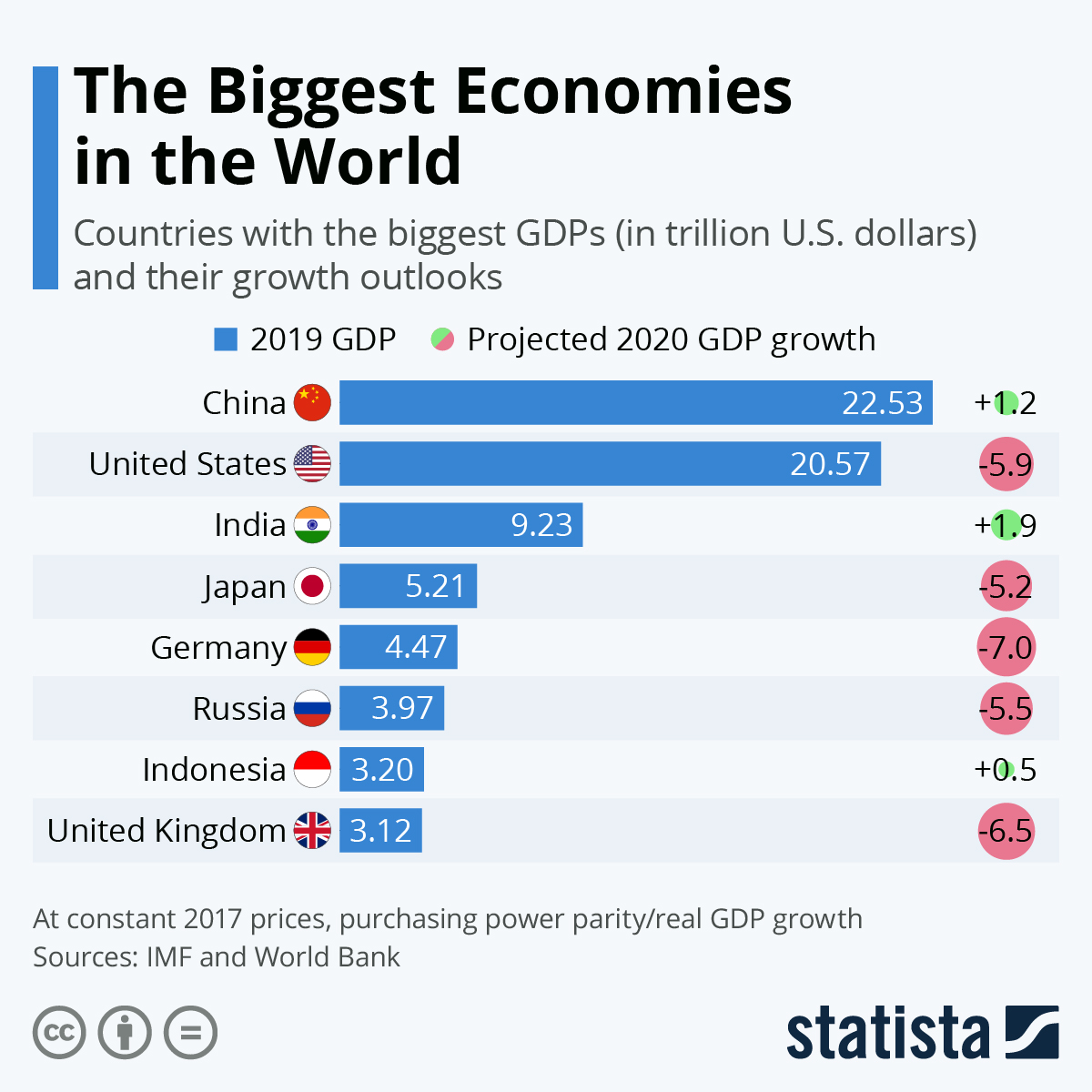 China is the biggest economy in the world in terms of the gross domestic product (GDP) based on the data from the International Monetary Fund (IMF).

With a 2019 GDP amounting to USD 22.53 trillion, China is significantly ahead of the second placer United States with a GDP of USD 20.57 trillion.

Even larger is the gap between the United States and India with a GDP of USD 9.23 trillion — less than half the economy of both the U.S. and China.

In the June 2020 Update of the World Economic Outlook, IMF continues to look at the economic downfall resulting from the COVID-19 pandemic. As it turns out, even these large economies are far from safe.

IMF projections place the global growth in 2020 at -4.9 percent,  a downward revision by 1.9 percentage points from April 2020.

This forecast update also marks the first time that negative growth is expected to be experienced across all regions and economic groups.

According to the IMF, the decreased growth projections are due to the underestimation of both the impact of COVID-19 on economic activity and the time countries need for recovery.

They also noted that this drop in economic activity will be especially harmful for low-income households. This will likely  undo the global poverty reduction efforts which lowered the percentage of people in extreme poverty from 35% in 1990 to less than 10 percent in recent years.

Moreover, countries which are still struggling with controlling transmission are likely going to experience more damages in their economic activity.

Effective policy will greatly help not only in minimising economic damage but also in speeding up recovery. With this, the IMF has several recommendations.

First, the health systems should be given sufficient resources, even among countries where the curve has already been flattened. IMF also prods the international community to increase their efforts to support national initiatives.

In order to soften the blow of economic shocks, they also recommend the implementation of rules-based fiscal stimulus measures which kick in whenever unemployment rate or jobless claims reach a particular threshold.

Meanwhile, targeted support measures like tax breaks, wage subsidies, cash transfers, and paid sick and family leaves can serve as a cushion for income losses. Along with liquidity support, the IMF also emphasized the need for multilateral cooperation.

In the post-pandemic world, the IMF also recommends that the global community should stockpile essential supplies and equipment in order to avoid encountering a supply crisis similar to what we have faced in the beginning of the pandemic.

Furthermore, effective modalities are also needed to be put in place to maximise the efficiency of delivering relief. Addressing underlying tensions which may aggravate our economic conditions is also equally important.

Lastly, the IMF noted that the support for health systems and medical research should not end when the pandemic does.