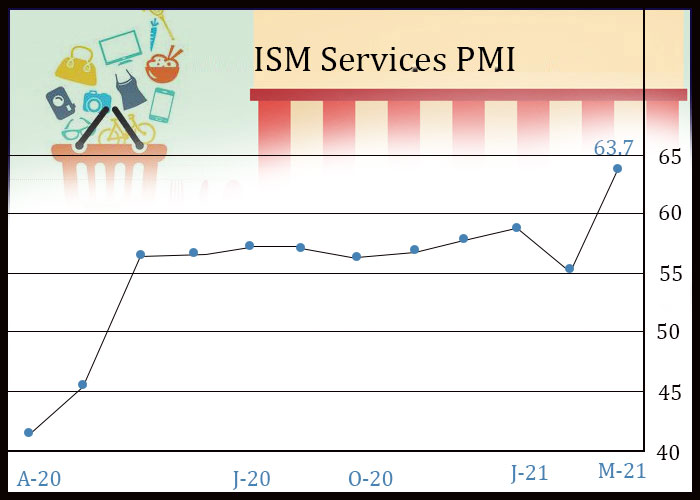 Growth in U.S. service sector activity saw a substantial acceleration in the month of March, according to a report released by the Institute for Supply Management on Monday.

The ISM said its Services PMI surged up to 63.7 in March from 55.3 in February, with a reading above 50 indicating growth. Economists had expected the index to rise to 58.5.

The jump lifted the Services PMI to an all-time high, surpassing the previous record high of 60.9 set in October of 2018.

“Respondents’ comments indicate that the lifting of coronavirus (COVID-19) pandemic-related restrictions has released pent-up demand for many of their respective companies’ services,” said Anthony Nieves, Chair of the ISM Services Business Survey Committee.

The sharp increase by the headline index came as the business activity index soared to 69.4 in March from 55.5 in February and the new orders index skyrocketed to 67.2 from 51.9. Both indexes reached record highs.

The employment index also climbed to 57.2 in March from 52.7 in February, indicating an acceleration in the pace of job growth in the service sector.

Meanwhile, the ISM said the supplier deliveries index inched up to 61.0 in March from 60.8 in February, with a reading above 50 indicating slower deliveries.

The report also showed the prices index rose to 74.0 in March from 71.8 in February, pointing to a continued acceleration in the rate of price growth.

Last Thursday, the ISM released a separate report showing the pace of growth in U.S. manufacturing activity also accelerated by much more than anticipated in the month of March.

The ISM said its Manufacturing PMI jumped to 64.7 in March from 60.8 in February, with a reading above 50 indicating growth in manufacturing activity. Economists had expected the index to inch up to 61.3.

With the much bigger than expected increase, the Manufacturing PMI reached its highest level since hitting 69.9 in December of 1983.