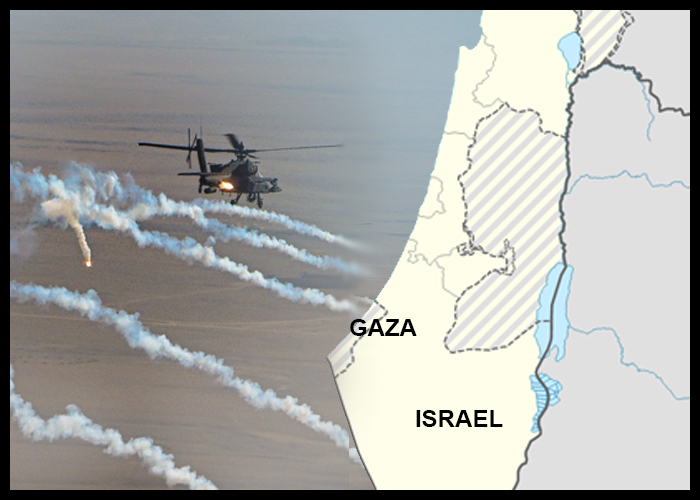 Israel intensified airstrike of Gaza in response to relentless rocket attacks from the Hamas-led militants in the Palestinian enclave defying calls by the United Nations to end conflict.

Amid reports that Israeli forces crossed the Gaza border and launched a ground war, Israeli army clarified that currently there are no IDF ground troops inside the Gaza Strip.

CNN reported from inside Gaza that Israeli forces have carried out dozens of airstrikes and heavily bombarded the panic-stricken northern Gaza with ground and naval forces.

Gaza was reportedly targeted by the heaviest Israeli bombardment yet overnight.

Dozens of families living near the border have fled their homes and taken refuge at UN refugee camps amid fears of an incursion. The panic was reportedly created after the Israeli army tweeted, “IDF (Israeli Defense Forces) air and ground troops are currently attacking in the Gaza Strip.”

Militants have fired more than 1,750 rockets into Israel since the fighting erupted on Monday, that resulted in eight deaths. Casualties on the other side of the border crossed 100, including children and women, in Israel’s counter attacks.

The United Nations Relief and Works Agency for Palestine Refugees appealed to all parties to exercise maximum restraint and comply with their obligations under International Law to protect women and children.

In a call with Israeli Prime Minister Benjamin Netanyahu, U.S. President Joe Biden reiterated the right of Israel to defend themselves. “In our view, rocket attacks from Hamas into civilian neighborhoods is not self-defense,” the White House said.

In view of the tensed situation in Israel, several airlines have suspended flights to that destination. Delta Air Lines, American Airlines, United Airlines, Lufthansa and British Airways have canceled flights to Tel Aviv.

“Like other airlines, we have canceled our flight to and from Tel Aviv today. The safety and security of our colleagues and customers is always our top priority, and we continue to monitor the situation closely,” British Airways said in a statement.