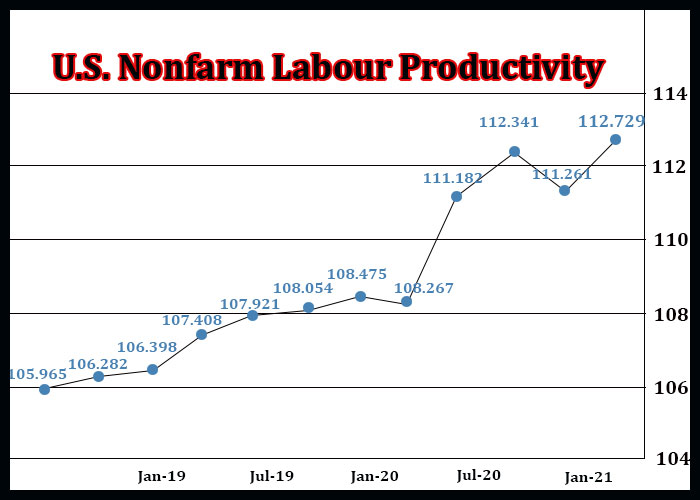 The jump in U.S. labor productivity in the first quarter of 2021 was unrevised from the initial estimate, according to a report released by the Labor Department on Thursday.

The report showed labor productivity surged up by 5.4 percent in the first quarter, unrevised from the estimate provided last month. Economists had expected the pace of productivity growth to be upwardly revised slightly to 5.5 percent.

The unrevised reading on productivity, a measure of output per hour, reflected upward revisions to both output and hours worked.

Output soared by 8.6 percent compared to the previously reported 8.4 percent spike, while the jump in hours worked was upwardly revised to 3.0 percent from 2.9 percent.

The sharp increase in productivity in the first quarter came after productivity tumbled by 3.8 percent in the fourth quarter of 2020, when a surge in hours worked outpace a spike in output.

“Labor productivity growth has been volatile throughout the pandemic due to wild swings in output and hours worked but we expect it will maintain a sturdy pace this year as economic activity surges and the labor market lags to overall economic recovery,” said Lydia Boussour, Lead U.S. Economist at Oxford Economics.

The revised increase in unit labor costs came as the surge in hourly compensation was upwardly revised to 7.2 percent from 5.1 percent.

The Labor Department also said unit labor costs skyrocketed by 14.0 percent in the fourth quarter of 2020, reflecting a significant revision from the previously reported 5.6 percent jump.